Since 2006 La Contessa de la Luna has’a been taking your calls inside “The Confessional”, live on the air waves at’a KBOO 90.7 FM, Portland.

Your support spiritually, emotionally, comically, and a little bit monetarily enables La Contessa to uh, just be herself, and to continue to expand opportunities both over the air waves, television and in person for listeners and for La Contessa. Praise the work of’a Reverend Billy Talen and the Church of Stop Shopping, and like’a to imagine she is a model for reduce and recycle, if you consider renting out 2 chalets as AirBnB, in category of recycling?

La Contessa is also looking forward to the next live performance benefit fundraiser, engaging callers from the radio program into the performance itself. If’a you can, please consider donate to support these endeavors.

You can now click reply, and send in your comments, confessions and witty anecdotes. Comments are reviewed and then made public, so don’t expect it to be showing up instantly. We are not robots.  After posting, you comment will be reviewed by our staff of 1, and then published, probably.

This site uses Akismet to reduce spam. Learn how your comment data is processed. 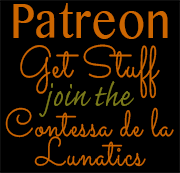 Join the Contessa de la Lunatics and stay up to date on all things Contessa Luna.